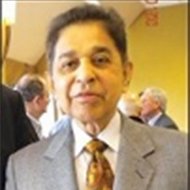 Dr Ninan T Mathew was born in the beautiful state of Kerala, in south India, and received his undergraduate degree at the University of Madras in Tamil Nadu and his medical degree at Trivandrum Medical College, Kerala. His interest in neurology started in medical school. Post-graduate training in neurology followed at Christian Medical College, Vellore, India. He completed additional fellowship training in cerebrovascular disease and stroke at Baylor College of Medicine in Houston, where he subsequently served as a faculty member.

His interest in headache started through research, measuring cerebral blood flow in migraine patients while at Baylor. Early on, he realised that headache was totally ignored and poorly understood by physicians, even though it was a common malady. In the 1970's, aetiology and treatment of headache was primitive and the patients suffered needlessly with overuse of pain medication. Comorbidities of migraine were not given appropriate importance.

Dr Mathew significantly contributed to medical literature, with more than 200 scientific publications to his credit, in leading journals such as JAMA, Lancet Neurology, and Neurology. These include the first description of transformation of episodic migraine into chronic daily headache (transformed migraine or chronic migraine); clinical importance of medication overuse in determining the progression of chronic migraine; and the importance of detoxification. Dr Mathew strongly believed that the majority of chronic headaches are migraine variants and that medication overuse and comorbidities are important factors that perpetuate the process.

He wrote book chapters for numerous leading textbooks and monographs dealing with headache and edited books on cluster headache and his Handbook of Headache, which he co-authored with Dr Randy Evans, covers modern advances in headache.  Dr Mathew was guest editor for several Neurologic Clinics and served as a member of the Editorial Board of Headache and Cephalalgia. He was a frequent reviewer for Neurology, Headache,Cephalalgia, and The Lancet.

Dr Mathew was a fellow of the American Academy of Neurology and was on the faculty of the courses offered at the annual meeting of the Academy. He was an invited lecturer on headache in medical meetings and universities in the United States and abroad, giving lectures on chronic daily headache, drug-induced (analgesic rebound) headache, and cluster headache. He was featured in a 2002 headache cover story in Time Magazine and appeared on numerous radio and television programs for the National Migraine Foundation and the American Council for Headache Education.

Dr Mathew trained a number of physicians from various countries who have done fellowships at the Houston Headache Clinic and participated in clinical trials of new medications for headache therapy and directed more than 100 such studies.

In February 2012, he received a Lifetime Achievement Award from the Texas Neurological Society at its annual conference in Austin, Texas.

In addition to his active career, Dr Mathew was involved with various cultural institutions. He was a founding member of the Indian Doctor's Club in Houston and served as its second president. He was president of the India Cultural Center also in Houston and was on the advisory board of the Asia Society Texas Center. He was a founding patron of the Hobby Center for the Performing Arts and the Asian Galleries of the Museum of Fine Arts, Houston.