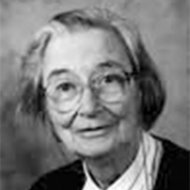 Marcia Wilkinson set up the Regional Neurological Unit at the Eastern Hospital, London, a rehabilitation unit for the young disabled, many with severe head injuries from car accidents. Her work in the migraine field is similarly pioneering. She set up the first migraine clinic in the UK at the Elizabeth Garrett Anderson Hospital in 1963. She helped found an NHS migraine clinic at St Bartholomew's Hospital and, from 1970 until her retirement in 1995, was Medical Director of the City of London Migraine Clinic, the first clinic in the world to see patients in acute migraine attacks.

Never one to turn away a new experience, she took on the Editorship of Cephalalgia shortly after her 70th birthday with no previous experience of running a journal. During her 2 years as Editor-In-Chief subscriptions increased and the quality of the journal improved with a parallel rise in the impact factor.

A firm believer in the role of women in medicine, Dr Wilkinson has supported many doctors throughout their careers and has had the dubious experience of being a patient of some of them in later years. Around the late 1940s she was one of the first registrars to be appointed at the London Hospital (now the Royal London). As the first woman to apply for the post, she became the centre of an intense debate on whether women would be suitable tutors for the male students and junior doctors. The discussion was lengthy and the late Lord Russell Brain - a man of few words - was asked for his opinion. He replied "Since when have our wives been unsuited to bringing up our children". She was duly appointed.